"I got famous for all of the wrong reasons, and then I was at a crossroads."

or find the file at http://traffic.libsyn.com/hopesports/HS24-NASCAR-Racer-Michael-McDowell.mp3 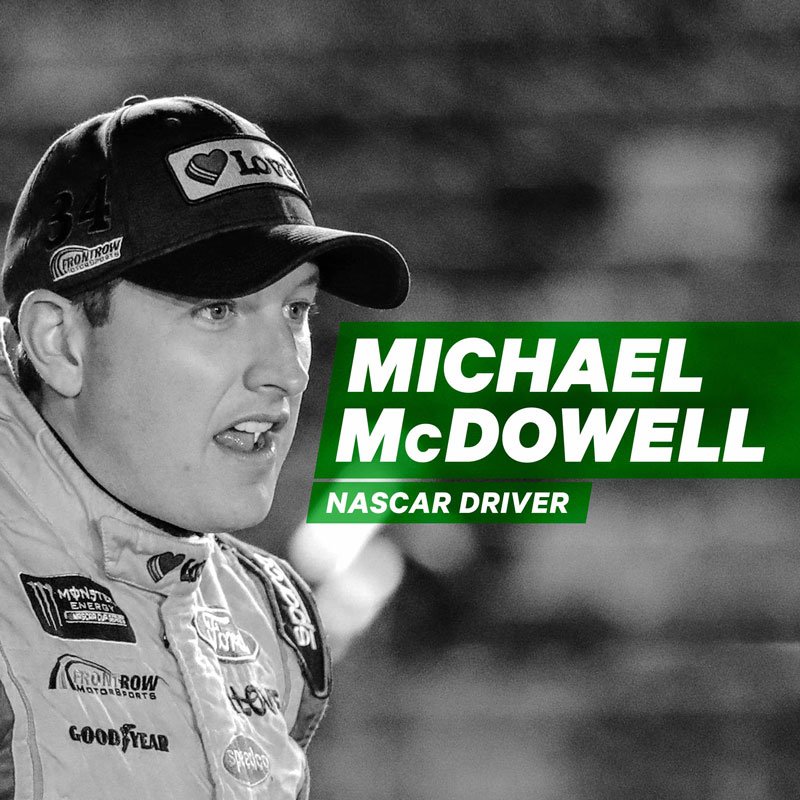 "I got famous for all of the wrong reasons, and then I was at a crossroads."

From as far back as he can remember, Michael McDowell was racing. Whether it was on foot, on a bike, or in the driver’s seat, he was chasing down the front of the pack, fueled by speed and victory. He raced BMX bikes before he started preschool, and was racing go-carts nationally by age eight. Over the next ten years he would rack up back to back international titles, a world title, and enough of a reputation to be sponsored in Formula One racing. Not long after, however, more opportunities presented themselves in NASCAR and Michael made the shift, picking up a Rookie of the Year award in his first season.

Despite the accolade, Michael remembers that year being incredibly humbling. He came from circuits where he regularly finished in the top of the pack on a regular basis. NASCAR was bigger, fasted, and more frequent leading him to feel lost in the pack at times. It didn’t take long for him to because a household name among NASCAR fans, but as he says, “I got famous for all the wrong reasons.” In 2008 at Texas Motor Speedway Michael hit some oil, skidded, overcorrected, and hit the wall head-on at 190 mph. Spectators cringed and held their breath as first responders pulled him from the wreckage. Miraculously, he walked away completely unscathed and even raced the following day. The crash instantly brought national attention; Michael was on the Today Show, Ellen, and across every sports section. “I had a crossroads,” he says. For some, it would have been the perfect moment to build his brand, highlight his career, and gain sponsors, but for Michael, a recently committed Christian, he chose to use it as a platform for sharing his faith in God who saved his life. “It was a turning point of surrendering the spotlight and refocusing on what I wanted to represent and who I wanted to build a brand for,” he says.

Shortly after his crash, Michael was signing a multi-year, million dollar deal. But the security was only an illusion; six months later with his pregnant wife at his side, he was jobless, sponsorless, and prospectless. But one thing Michael was not was hopeless. “I believe that God works things together for the good of those who follow him,” he says. It wasn’t easy to navigate the unexpected terrain of being cut from his contract, but he never doubted that something good was on the horizon, whether that was in NASCAR or not. In 2010 he went with his family to Monterrey, MX to get some space to discuss and discern their future in the sport. He even felt that perhaps his time with NASCAR was coming to an end, but remembers hearing God nearly audibly say, “Keep doing what you’re doing and I’ll take care of the rest.” When they returned to the States he was released from his team, but that same night was offered a prestigious position with another company. That experience has set the tone for how Michael and his wife navigate the field of professional racing — with gratitude and open handedness. Each November they re-evaluate whether or not another year of racing is what God has for their family.

Throughout his years racing, Michael has noticed a shift in the way that community is developed. When he started ten years ago he remembers the cold, competitive vibe between driver. Despite seeing the same faces every single weekend of the year, drivers tended to keep to themselves, in their trailers, and out of each others personal lives. In an effort to reach out to other competitors, Michael partnered with Motor Racing Outreach to start a bible study among athletes that he still participates in to this day. Over the years barriers have come down amongst the drivers, but most of the credit is due to their families. Once everyone started getting married and travelling with their kids more community developed as people were pulled from their trailers to chase the kids around the grounds.

Michael continued to diversify his passions as he and his wife began to explore how they could support orphan care and adoption ministries around the world. They always had planned to adopted and started looking into adoption from Ethiopia, but were forced to turn towards Central American as Ethiopian adoption programs were closed. Unfortunately, yet again they were turned away by Honduras who also shut down international adoption options. Eventually, they were put in contact with an agency in China and adopted their son, Lucas, when he was four years old. They love to tell their son that God choose him even before he was born and see their drawn out struggle to adopt as a road directly to him.

For Michael, racing with NASCAR is more than just a privilege, it’s a calling. “I almost tried to ‘escape’ to the mission field at one point because we thought it would be easier,” he says. Racing forty weekends out of the year, traveling all over the country, and being away from his family is never easy. The schedules are a non stop juggling act and it can be difficult to balance all of the elements, but they are in it as a family. “With racing, I just know that I have this year,” says Michael. And as the pages in the calendar turn, they know that they’ll again ask if God is planning another year of NASCAR for their family. But as always, Michael remains grateful, hopefully, and assured that this is exactly where he’s supposed to be. Keep track of Michael and cheer him on this season on Twitter, Instagram, and Facebook.

Dive straight into the feedback!Login below and you can start commenting using your own user instantly