How Vulnerability Paved The Way to Victory

June 12, 2019 | Overcoming Injuries
There is power when you care more about the team that you’re performing with rather than yourself
or find the file at http://traffic.libsyn.com/hopesports/HS23-Olympic-Gymnast-Jonathan-Horton.mp3 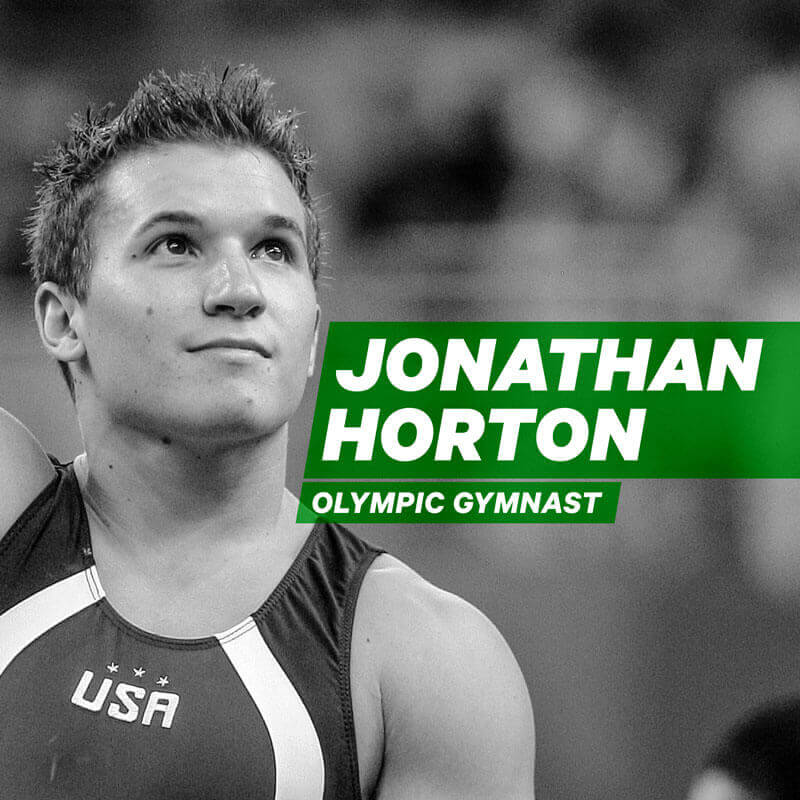 At age four, Jonathan Horton got lost in a Target and was found 25 feet in the air after he scaled a support beam in the middle of the store. At only three years of age he held on to a garage door as it rode to the top of its track, leaving him dangling from the ceiling. His propensity for literal monkey-business led his parents to stick him in gymnastics, hoping that it would provide an outlet for his tumbling, climbing, and risk-taking. Little did they know that their son would go on to spend the next 28 years competing, represent his country in back-to-back Olympics, have two medals hung around his neck, and hold NCAA records that still stand today.

One of Jonathan’s clearest memories is the moment that he decided to take gymnastics seriously. At age ten he sat in front of the television, gripped by the 1996 Olympics Women’s Gymnastics team that became known as the Magnificent Seven; they were the first ever team gold medal in Women’s gymnastics and upstaged the Russian’s who hadn’t lost in decades. “I watched the medals go around their necks, the flags go up, the national anthem play, and I grasped what the Olympics was about,” said Jonathan. He went back to the gym the next day with a new sense of purpose, focus, and determination. Those Olympics catalyzed something in Jonathan and he was never the same. “Everything goes back to those ‘96 Olympics,” he said.

At age 18 he was the youngest male to qualify for the Olympic trails and was star-struck competing alongside several of his personal heroes. His NCAA career brought him six national titles and 18 All-American ones, but his collegiate season also brought him something far more important: humility. He admits to starting at the University of Oklahoma as cocky and arrogant with his eyes only set on individual achievements. But once he had a taste of team competition and stood alongside the other men on the podium, he understood the power of a collaborative effort. For once he felt motivated to perform not to further his own agenda, but to show up for his team, help them do the absolute best they could, and to achieve a goal all together. “I want to teach the young upcoming athletes today the power that you have when you care more about the people that you’re performing for rather than yourself,” said Jonathan. His mentality shifted so much that he almost struggled to pull together his best events in individual competition.

His collegiate career set him up well for the 2008 Beijing Olympics and he qualified for the team, but admitted that the Olympic Trials were far more nerve wracking than actually competing at the games. Since the final goal was just to be an Olympian, when he achieved that a weight was lifted from his shoulders and he was able to enjoy the experience. But the men’s team entered those Games with a lot of skepticism and issues with injuries. In fact, they were hardly expected to even qualify to go to the Games at all due to their train-wreck of a World Championships the year before. The team took 13th place and Jonathan fell six times during that meet – a record number of mistakes from any US competitor in history. The fans, coaches, and teammates were furious and completely lost trust in Jonathan to lead the way for his team.  “I was supposed to be this rising star and I bombed at the World Championships,” he said. The Hamm brothers, Morgan and Paul, were called out of retirement in an attempt to rally the team and rescue their presence at the Games. “We were not a medal worthy team,” said Jonathan. But shortly before the Olympics Paul Hamm broke hand and, during the preliminary meet in Beijing, Morgan Humm broke his ankle. Reserve athletes were flown over and the team was made up of the same men who had botched the World Championship the year before; there was almost no hope for them. “We didn’t want to look like the jokes at the Olympics,” said Jonathan. And it was this desperation that led them to a really interesting place: vulnerability. The night before the finals all of the guys met outside on a balcony in the athlete village and sat under the stars together. And rather than discuss their routines or dismounts they talked about their fears, challenges, hopes, and disappointments. They poured out their souls to one another and made a pact. “We said: no matter what we are going to walk out of there with our heads up, our chests held high, and we’re going to represent the US at the Olympic Games,” said Jonathan.

The next day the men walked into the arena and had the meet of their lives. Forty thousand spectators chanted “USA!” as they held onto a first place standing until the final event of the meet. A team that was hardly expected to do much more than flop was holding off Russia and China in gold medal standing. The final event was pommel-horse, which Jonathan said they knew was their weakest skill, but if Alexander Artemev could have the event of his life they might have a shot at keeping medal standing. Sure enough, by less than 1 point, Team USA finished ahead of Germany and won bronze. Jonathan stood on the podium with a medal around his neck and knew that they had done something miraculous. To this day he gets comments about the disappointment of missing out on silver or gold, but for Jonathan that team fought their way out of a hole for bronze and it was a true victory.

The following week was the individual competition where Jonathan took 9th place overall, but qualified into the high bar final. He made a scandalous decision to pull together a brand new routine for the final, even to the shock and discouragement of his coach and teammates. He was only able to run through it roughly ten times in practice before the event and fell every single time. But when competition came he executed it perfectly and brought home a silver medal, only .05 points away from gold. “The silver in high bar was cool, but it was nothing compared to winning with my team,” said Jonathan. The 2008 Olympics will live as legend for USA Men’s Gymnastics and also for him personally.

At the following World Championship Jonathan broke two bones and tore a ligament in his foot. He rushed through surgery and recovery to heal in time for the 2012 Olympic Trials, but the London Games would have a totally different feel. The men’s team didn’t have the luxury of being the ignored underdogs, in fact, they were considered the best team in the world and expectations were incredibly high for a gold medal performance. Jonathan was the eldest member of the team by six years and his leadership was crucial to the team. They won the preliminaries by a landslide of five points, but the final round of competition was a 180 degree turn. “Everything fell apart from the first event,” said Jonathan. By the second event the men knew that they were completely out of medal standing as they watched teammates fall one by one. Jonathan attempted to keep morale up, but felt like he was reliving the botched World Championship from years prior. Overall, the London games have left a sour taste in his mouth, but he knows that those athletes are better now for experiencing great loss under great pressure; something every competitor has to learn to overcome.

The London Games were the beginning of the end of professional gymnastics for Jonathan. As much as he would have loved to make another Olympics, injuries compounded upon one another and as soon as he recovered from one surgery, another issue presented itself. From complete bone, muscle, and ligament repair in his shoulder, to tearing a pectoral muscle, to retearing the shoulder muscle again — he just couldn’t get a back up to full strength. Even after he officially retired from gymnastics, he continued to train for a year and a half. “The tail end of my career was tough; I spent a lot of time down in the dumps,” he said. He remembers sitting on the couch after his final shoulder surgery, with gymnastics now behind him, and his wife caring for his infant daughter who he couldn’t even hold yet because he was recovering and he thought, “Now what?” Despite taking time to come to terms with his retirement, Jonathan is now grateful for an incredibly long, rich career. He has continued pushing his own athleticism through American Ninja Warrior and shares advice that he wished he would have had as a young athlete in his book If I Had Known.  He is writing an autobiography that will be released later this year and is working towards giving back to the next generation of athletes, including his own daughter who he cheers on at her gymnastics meets.

Sorry, no transcript is available for this episode.